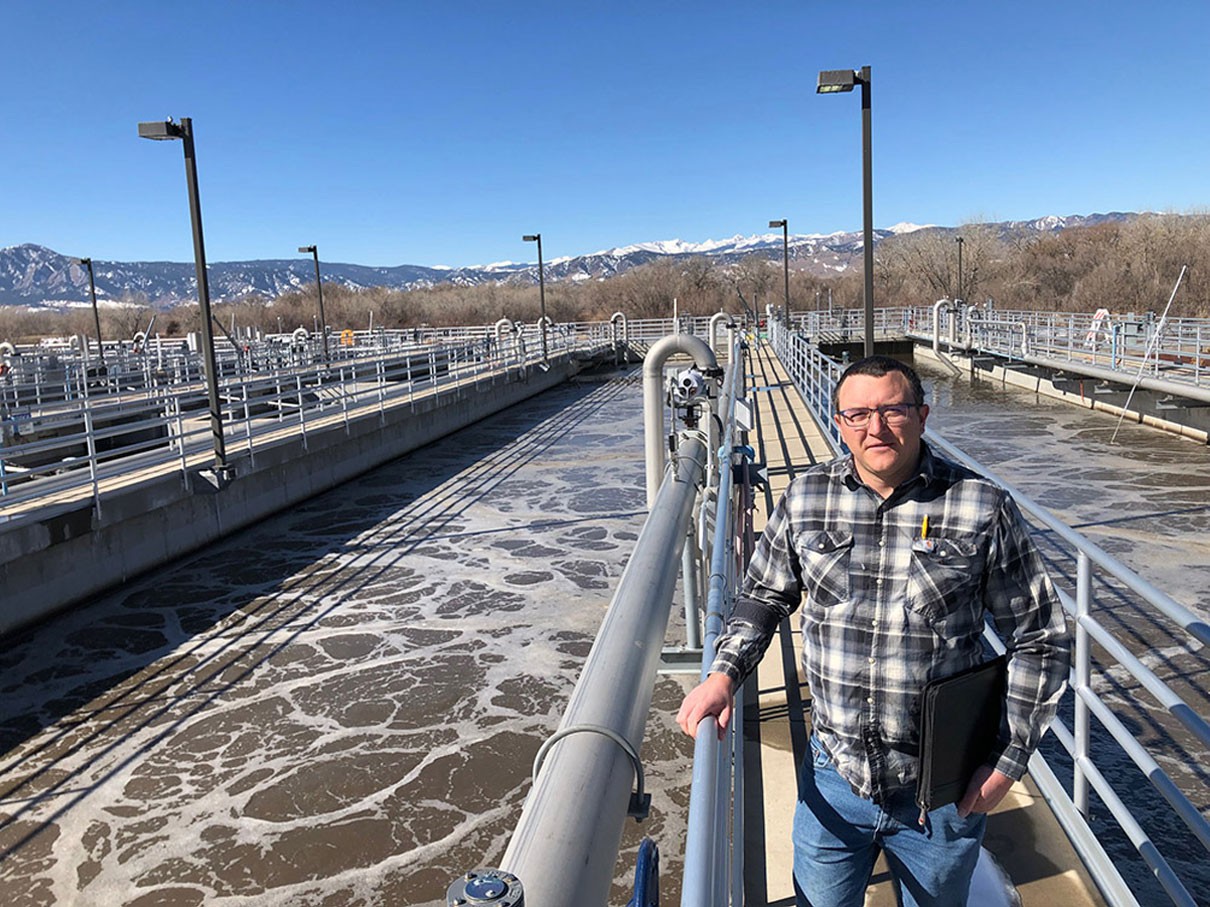 Taking the Waste Out of Wastewater

How What We Flush Can Be Repurposed, Recycled, and Reused

We gladly recycle our aluminum and paper with the expectation it gets repurposed into something new. But the idea that our human waste that we flush down the toilet would get reused somehow might make us wrinkle our noses. Not so for the city of Boulder’s wastewater treatment folks who see sewage as a valuable resource.
By Jamie Sudler, Executive Producer

BOULDER, Colo.—Flushing the toilet. It’s something we all do several times a day. We take showers, wash our hands, do the dishes, and the laundry. We probably don’t think much about where the water and the stuff in it goes after we’re done. It’s out of sight and out of mind.

But not to Dr. Sherri Cook, who teaches environmental engineering at the University of Colorado, Boulder. Thinking about what goes down the drain is her job and her passion. Dr. Cook calls herself a “wastewater person” and for people in her field, when we flush, “that’s where the fun starts.”

Cook sees what we’re putting in the wastewater system as valuable treasure that shouldn’t go to waste. She says a recent research study asked adults in the U.S. to draw the water treatment cycle, and a lot of people just stopped at the toilet. “We flush it and it’s done, and then they have no idea where it goes from there.”

After the water and its content leave our homes and businesses, it used to go through a process we called “treatment.” But Dr. Cook says it’s important for people to realize we’re not really treating our wastewater, instead we are managing the resources in it to our benefit.

She says the three resources recovered are nutrients, energy, and of course, water. There’s carbon in our waste that we can turn into methane or renewable natural gas for energy. We take nitrogen and phosphorus and turn them into fertilizer. The water itself can be cleaned and returned to the river from which it came to support aquatic habitats and for us to drink and irrigate crops.

How is sewage magically turned from something with an “ick factor” into valuable commodities? For that answer, I make a trip to what used to be called the City of Boulder’s wastewater treatment plant. However, to reflect the industry’s paradigm shift, its director Cole Sigmon says it’s now the Water Resource Recovery Facility.

The plant is placed at a lower elevation in the northeast part of town, which allows gravity to send waste downhill without needing energy to pump it. Sigmon explains that when someone in Boulder flushes a toilet, it takes about two hours for their contribution to get to the facility and begin its resource recovery journey. Upon arrival, sewage travels up what looks like small escalators that remove toilet paper and other debris. It’s a loud and pretty smelly place and a bit unnerving to look at. Once an operator found a couple of hundred-dollar bills in the raw sewage, and even a caiman—a small alligator—that was quickly turned over to wildlife officials. Trash like toilet paper is taken to landfill after being washed.

Then the liquid part goes to clarifiers—concrete circular ponds with long rotating arms that skim grease and other materials floating on the surface. After that, the water is pumped to aeration basins, where biology takes over the treatment process and removes not only organic material but also some compounds like nitrogen and phosphorus. The basins are large rectangular ponds that also break up hormones excreted by humans that can feminize male fish in rivers.

The effluent, without that sludge, is run through UV disinfection and returned to Boulder Creek, from which it originally came, which flows just to the north of the facility.

The sludge, which at this point has the consistency of tomato soup, is run through centrifuges to remove more water. The result is something that Sigmon describes as looking like chocolate brownie mix and is called biosolids. Those biosolids are picked up from the Boulder plant by about seven trucks per week and taken to eastern Colorado, where they are used by farmers as fertilizer.

The anaerobic digesters that produce the biosolids also produce methane and, after a process that the City of Boulder implemented about a year and a half ago, the natural gas is put into a pipeline owned by Xcel Energy. 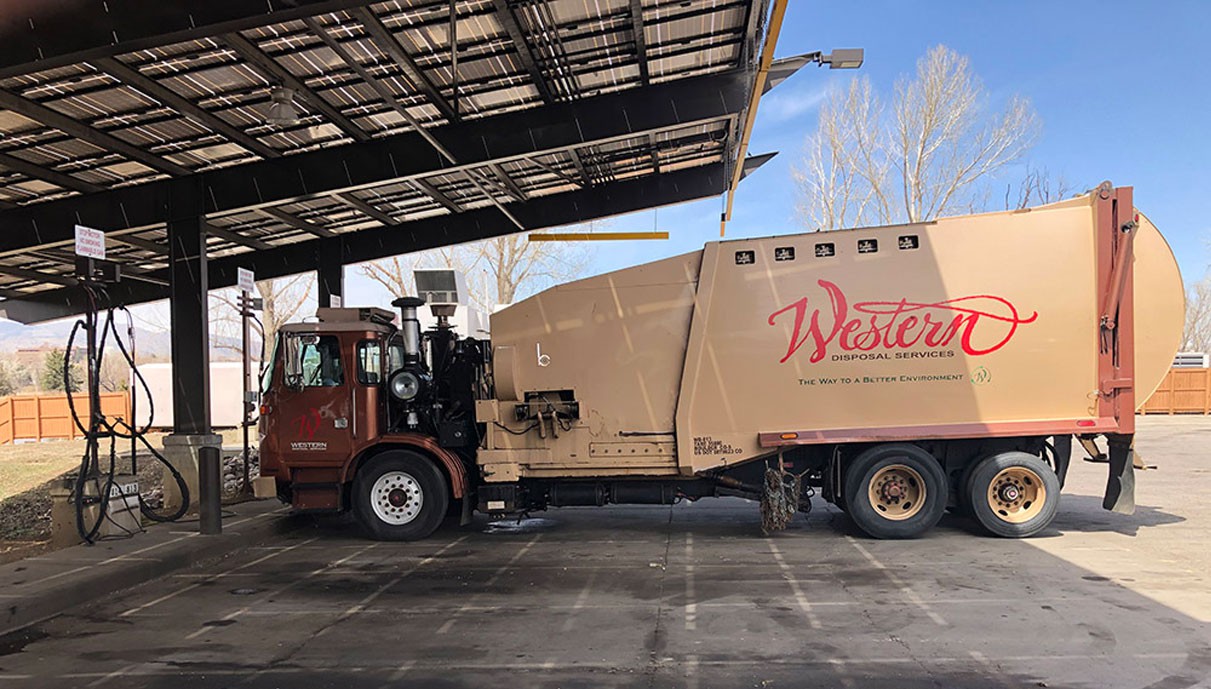 Not far away is Western Disposal Services, which uses all the renewable natural gas produced at the Water Resource Recovery Facility to power its trash collection trucks. Of course, it’s impossible to track the exact molecules of methane that the water facility produces after they enter the pipeline. Nevertheless, the city gets paid by Western Disposal for the renewable energy produced by residents’ wastewater.

Kathy Carroll, communications director of Western Disposal said the company uses 60 trucks to collect trash, recycling, and compost materials all the way from Nederland in west Boulder County, east into Broomfield, and now even in parts of Jefferson County. On a tour of the facility, Carroll points out a long row of about a dozen hook-up stations where, what we used to call garbage trucks, fill their tanks with natural gas under the shelter of solar panels. About 38 of their trucks are running on the renewable natural gas that is produced by the city’s Wastewater Resource Recovery facility.

Western Disposal began to transition its fleet from diesel to compressed natural gas in 2010 and is now complete. Carroll says that Western is a locally owned company, and the 160 people who work there also live in the community, raising their families and benefiting from cleaner air associated with less diesel pollution. The reduction of carbon emissions that came from the transition to compressed natural gas is important to Western Disposal, and the company has entered a long-term contract with the city to purchase all the gas the wastewater plant produces.

Could there be other resources recovered from wastewater? Water Resource Recovery Plant director Sigmon says there are several ideas. For one, the water moving though pipes is often warm and its heat could be harnessed to run the plant. Also, Sigmon says that some of the algae that grows in their clarifiers could be harvested for fertilizer and one day be used to make, surprisingly, shoes.

Back at the University of Colorado, Dr. Cook says likes ideas that look at the big picture. For example, she says, “We can get more methane from the feces that's coming out of humans and decrease some of the fracking that's happening. There's a huge benefit, right?”

Although challenges lie ahead for the wastewater treatment industry from emerging contaminants like PFAS chemicals and microplastics, Dr. Cook sees them as opportunities to find solutions that might yield unique resources to make a truly circular economy where waste is put to work instead of just circling the drain.

Cook says, “It's maybe a little embarrassing to be this passionate about waste, but I do, I do really like it.”  💧

This story was produced as a part of a series by KGNU Community Radio on zero waste.