Last week, the United Nations Intergovernmental Panel on Climate Change (IPCC) released its latest report, Climate Change 2022: Impacts, Adaptation, and Vulnerability. There is cause for hope but also a dire warning—this is the decade we must act if we are going to avoid the worst effects from global warming. 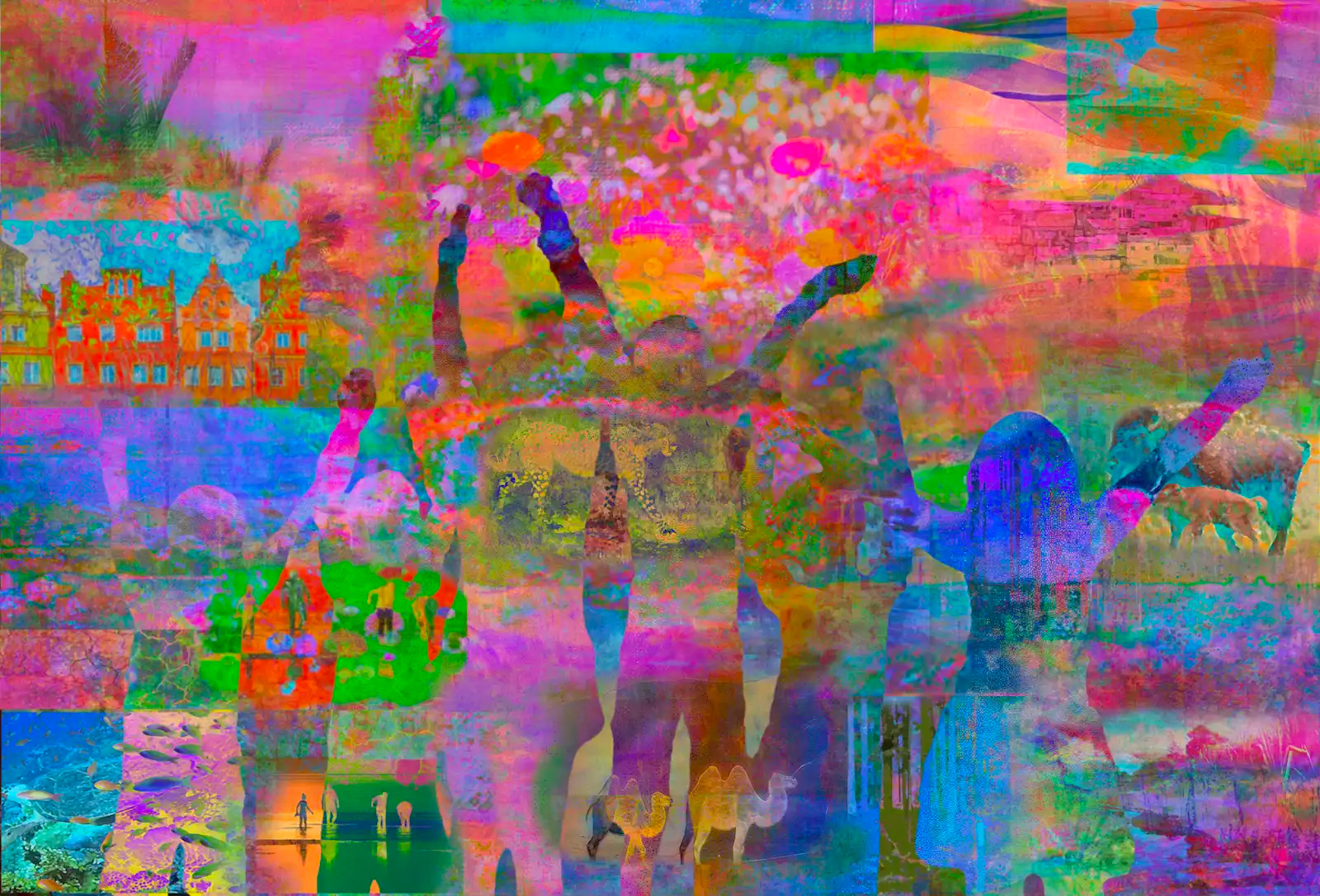 The IPCC says that human-caused climate change has already taken a toll. About half of the almost eight billion people in the world experience severe water scarcity for at least one month every year. And in the last 50 years, almost half of all disasters have been related to floods. According to the report, since 2014, extreme heat waves, droughts, and wildfires have increased in frequency far beyond their natural variability. Expanding areas are projected to face worsening droughts and even more destructive storms and inundation.

There are limits to our ability to adapt to climate change, according to the report. For example, humans can’t protect coral reefs from warming seawater. The only strategy to stop the disappearance of corals is to stop emitting greenhouse gases.

Some climate adaptations can lead to more harm. For instance, when a seawall is built to protect an area from rising water, it can prevent rainwater from draining, which can create a new hazard. This type of maladaptation especially affects people already marginalized and vulnerable. As the Los Angeles Times reports, the IPCC assessment focuses on protecting vulnerable people. The officials call for ramping up funding for reducing flood risks, improving access to clean water, and improving health care to deal with extreme heat. Poverty and the lack of basic infrastructure worsen the problems of global warming for millions.

The report urges everyone including governments, businesses, and individuals to move rapidly to meet the goal of limiting global warming to 1.5 degrees Celsius or 2.7 degrees Fahrenheit above pre-industrial levels. If greenhouse gases keep being emitted, every fraction of increase in temperature will magnify the losses from extreme events.

However, according to leading climate scientist Michael Mann of Pennsylvania State University, the good news is that opportunities do exist to move quickly away from fossil fuels and to bring greenhouse gas emissions down by 50 percent in the next decade. And if we do, the level of carbon in the atmosphere will start to come down. But for a while after eliminating CO2, the oceans will continue to warm and sea levels will rise. Also, there will still be higher flooding and wildfire risks. However, Mann said that we can limit those extreme events from getting much worse and also said that the technology exists to decarbonize most of the power and transportation sectors. The obstacles to doing so are political not technological.

An “Iron Curtain 2” Pulled Down Between Arctic Researchers

The Arctic is warming four times faster than the global average, but the Russian invasion of Ukraine could freeze any cooperation in the polar region. Last week, seven of the eight nations that make up the Arctic Council—the United States, Canada, Denmark, Finland, Iceland, Norway, and Sweden—announced they were suspending all their work indefinitely because Russia, also a member, had violated the Council's core principles of sovereignty and territorial integrity. 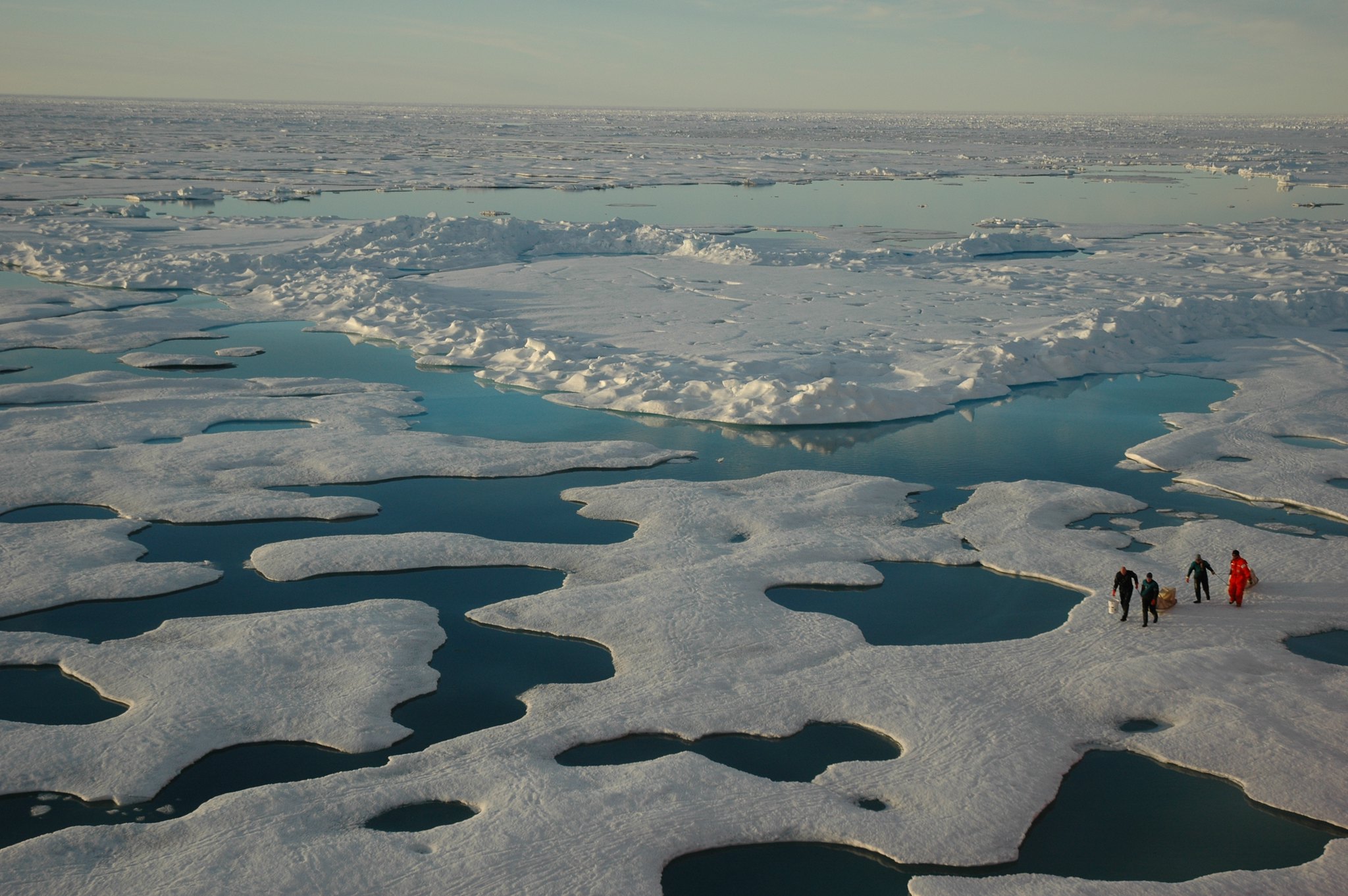 Scientists in an endless vista of ice, sea, and meltwater as seen from the USCG Icebreaker HEALY in the Arctic Ocean, July 22, 2005. | Credit: Jeremy Potter NOAA/OAR/OER.

The Arctic Council was created in 1996 as a way for countries and Indigenous groups in the polar north to work together on issues like climate change, sustainable development, and environmental protection. The Council, which includes five NATO states and two close allies, had managed to stay above the fray of politics, but, as Geospatial World writes, tensions could cause Russia to take a tougher stance on its earlier ambitious claims on the Arctic, leading to potential conflict that could endanger the fragile ecology of the region.

Russia’s actions in Ukraine have caused research expeditions to come to a grinding halt. For example, according to the journal Science, a 2000 treaty between the United States and Russia governs management of roughly 3,000 polar bears that cross between the two countries. In recent years, U.S. and Russian scientists worked together to count, tranquilize, and tag bears to collect data about their health. Much of the research had been stopped due to COVID-19 and was just restarting. After the invasion, the U.S. Fish and Wildlife Service ordered government researchers to stop communicating with their Russian partners and cancel travel plans.

As the journal Science writes, the war has canceled research involving Russian, U.S., and Canadian scientists studying salmon ecology in the North Pacific Ocean. A U.S. scientist was supposed to travel on a Russian vessel to collect samples within U.S. waters, but when the invasion started on February 24, the U.S. National Oceanic and Atmospheric Administration (NOAA) told project leaders they couldn’t board the ship.

Science also reports that a researcher from the Royal Netherlands Institute for Sea Research, Jan van Gils, has dropped his plans to go back to Siberia this summer to study the plight of the red knot, a shorebird that summers in Russia and files to Africa in winter. Van Gils had worked with Russians and found that the birds’ sizes are shrinking because of shifting diets caused by climate change altering insect emergence.

Under Russian leadership, the Arctic Council was to conduct research on thawing permafrost, a pressing issue for the country, but the work is now in serious doubt.

James Morison, an oceanographer at the University of Washington, whose polar research began in the 1970s, said “It looks like Iron Curtain 2 has come down between us,” adding that it was a small concern relative to the suffering of the Ukrainian people but unfortunate, nonetheless.

The room erupted in cheers and applause last week at the United Nations Environment Assembly, when nearly 200 countries agreed to start drafting a first-ever treaty to curb the growth of plastic pollution. The agreement is not just about litter, like water bottles that get tossed and end up on beaches. Rather, the framework of the treaty would cover the full lifecycle of plastics, from design and production to disposal.

The agreement has been hailed as the most important multilateral climate deal since the 2015 Paris accord on global warming. A UN official, Inger Andersen, executive director of the UN Environment Programme told the Associated Press that it was “a triumph by planet Earth over single-use plastics.” A representative of the environmental group Greenpeace said the UN’s resolution is a “big, bold step to end plastic pollution.”

The Guardian reports that about seven billion tons of the plastic produced since the middle of last century are now waste. Three-quarters of that is littered on land, deposited in landfills, or accumulates in aquatic environments. The UN estimates that less than ten percent has ever been recycled. Also, plastic products release toxins and greenhouse gases during their lifecycle.

For the first time ever, the new agreement recognizes waste pickers—millions of people, including Indigenous, who scavenge for recyclable plastics among other goods. The New York Times reports that waste pickers work long hours amongst toxic vapors and fires and are paid little.

The treaty will cover packaging design both to cut its use and improve recycling. It will also provide financial and technical assistance to developing countries. The resolution was made after a week-long meeting in Nairobi, Kenya, and established a committee to draft the treaty by 2024.

How to Grow Spinach in the Desert Without Rain

Saudi Arabia is predominantly desert, so it would be the last place you might expect to grow a crop. But researchers did—by pulling water out of thin air. Scientists at King Abdullah University of Science and Technology (KAUST) used solar panels and a special hydrogel to sprout and grow water spinach (Ipomoea aquatica). 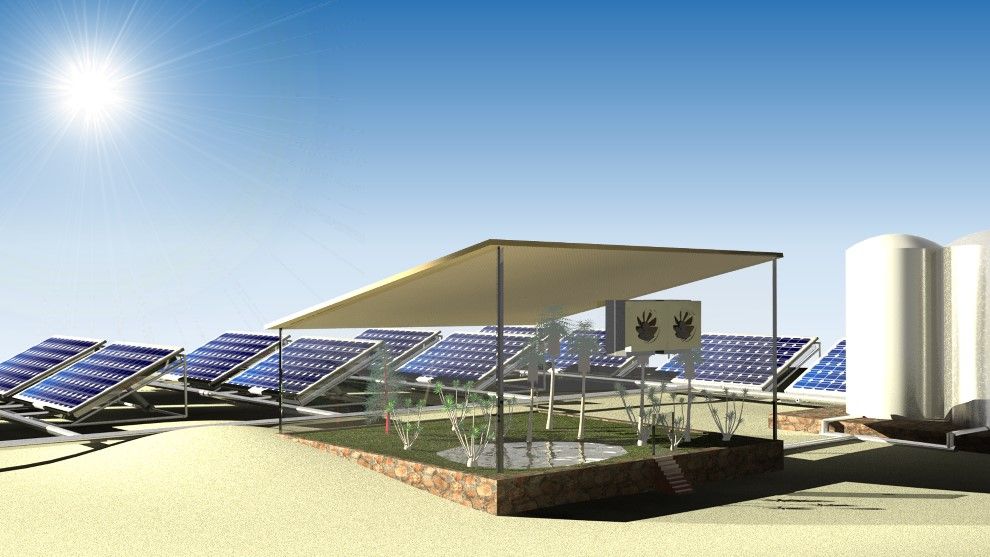 As Fast Company reports, solar panels typically only convert about 20 percent of the energy they absorb into electricity. The rest is released as heat. Instead of letting that heat go to waste, the researchers developed a unique hydrogel containing calcium chloride that can absorb more than its weight in moisture, and they spread a layer of it on the back of the panels.

While deserts are dry, there is moisture in the air—especially at night—and that’s when the gel absorbed water vapor. When the hydrogel heated during the day, a metal box collected the vapor and condensed it into water, which was then released to around 60 spinach seedlings in a planting box below. New Scientist reports that during the trial from May to June 2021, their prototype system called WEC2P produced 0.6 liters of water per square meter of solar panel, per day. After two weeks, the plants were seven inches tall. The gel also had the added benefit of cooling the panels and increasing their energy output.

The World Health Organization estimates at least two billion people worldwide lack safe drinking water, while 800 million lack access to electricity and 700 million battle consistent famine. Because the atmosphere holds an estimated 12,900 billion tons of freshwater, the researchers hope solar-driven atmospheric-water harvesting processes could potentially meet the UN drinking water requirement of five liters per day, per person. They say systems like these could provide a stable supply of water, energy, and food—the three of the most essential and indispensable factors of modern life and that are keys to universal achievements, according to the United Nations Sustainable Developments Goals (SDGs) by 2030.

The proof-of-concept design was published in the journal Cell Reports Physical Science.