Last week, flooding in the Midwest and Southeast caused severe damage. At least two people died in St. Louis, and at last count, 25 perished in Kentucky, in what the governor called the worst flooding event in his state’s history. The disasters were labeled 1-in-1,000-year rain events, but now, because of global warming, scientists say they will become more common. A hotter climate means there is more moisture in the atmosphere, which can then be released in heavier downpours. 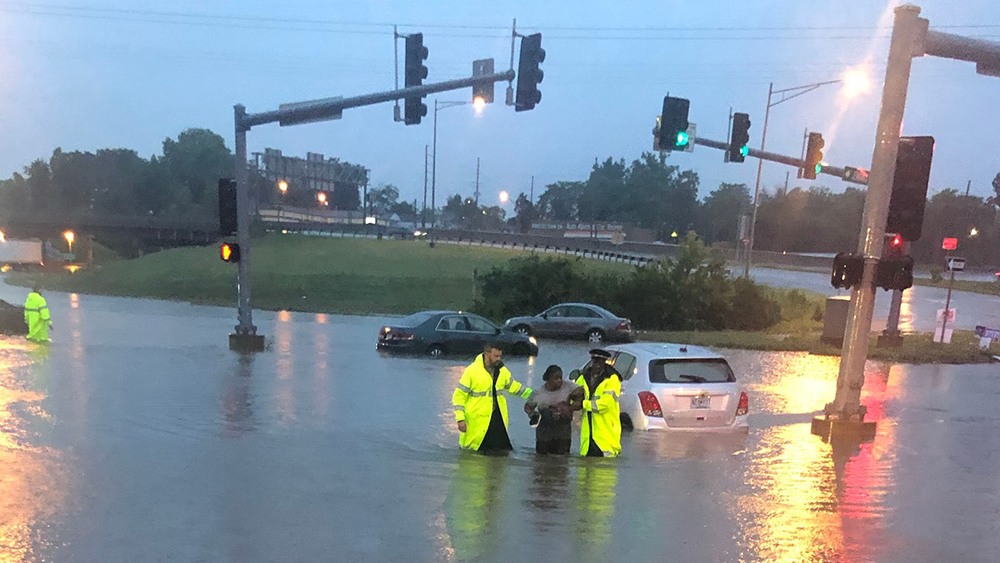 A motorist is rescued from a stalled vehicle in Jennings, Missouri, just north of St. Louis, Missouri, July 26, 2022. Dozens of water rescues were carried out across the St. Louis metro area during record-setting rainfall. | Credit: St. Louis County Police Department

The Washington Post reports that the floods came from storms that regenerated and linked together like train cars passing on a track over the same area. Although fueled by climate change, the conditions were different from a hurricane that stalls like Harvey did five years ago over Texas, or a single thunderstorm that unloads on a location.

The conditions that led to the floods began with high pressure over Bermuda and storms over the Gulf of Mexico that injected water vapor high into the atmosphere and was blown north. A stationary weather front then blocked the movement of the moisture that was heated by the sun. Along that front, fierce storms dropped nine inches of rain in parts of Kentucky in 12 hours, and more than ten inches in St. Louis, about 25 percent of the region’s annual total. The BBC reported that the increasing amounts of rainfall over the years is what experts have predicted for the region as Kentucky’s climate becomes hotter and wetter from climate change.

Many people were still unaccounted for after the flooding, and more rain was forecast for Kentucky this week.

As the catastrophic floods were occuring in St. Louis and Kentucky, Senate Democrats took aim at the climate crisis with new legislation that could now succeed because of an unexpected compromise. The Inflation Reduction Act—spending $370 billion over the next ten years—will need all 50 Democrats in the Senate, including Joe Manchin of West Virginia, who agreed to the legislation after secret negotiations. 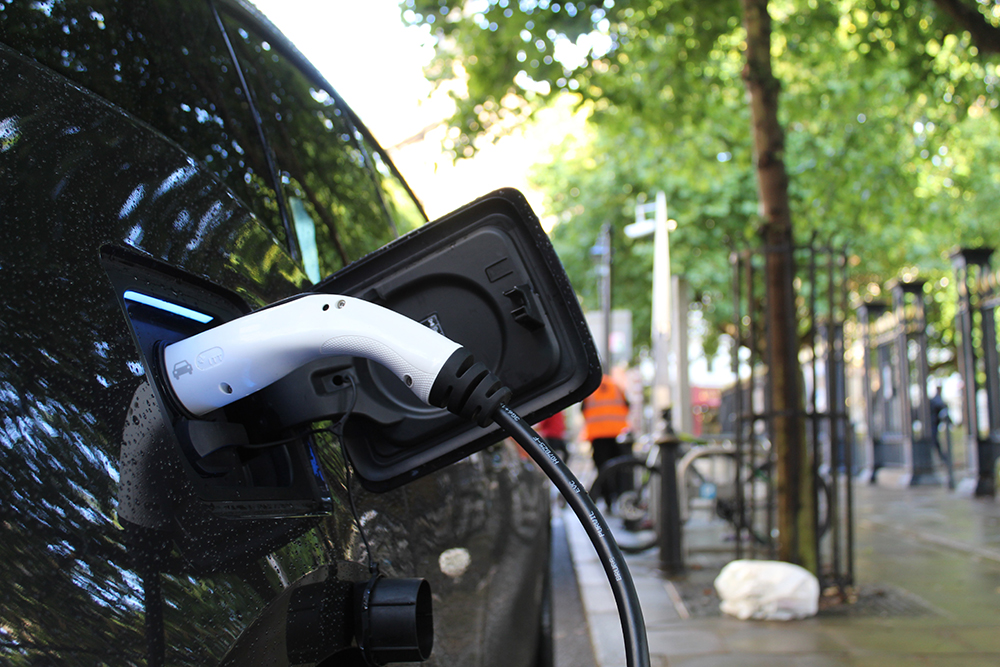 Analysts expect that, if passed, the bill could cut U.S. greenhouse gas emissions by 40 percent by 2030 compared to levels about 20 years ago. Experts have said that they need to be slashed in half to avoid catastrophic climate change.

The compromise provides large tax credits for solar and wind projects, battery storage, and geothermal energy. States and utilities would receive funding to transition to zero carbon power generation. The U.S. Postal Service will electrify its vehicles, and a new initiative will lessen methane leaks from oil and gas operations. The bill also supports wildfire prevention and sustainable farming practices.

Depending on their income level, individuals may be able to get a tax credit up to $7,500 to buy a new electric vehicle or $4,000 for a used one. Low-income households will be able to participate in a program to make residences more efficient, and credits will encourage homeowners to install heat pumps and solar systems. In terms of environmental justice, disadvantaged communities that have suffered the most from fossil fuel pollution will receive $60 billion.

However, to gain the support of Senator Manchin, the new bill would force the government to allow oil and gas drilling in the Gulf of Mexico. The New York Times reports Manchin was also promised a vote to speed up permitting of projects such as a natural gas pipeline in his state.

Some environmental groups like 350.org and the Center for Biological Diversity expressed outrage over continuing the support of oil and gas operations. A spokesperson for the Center for Biological Diversity called the bill a “climate suicide pact that would fan the flames of climate disasters.” Many environmental organizations signed a letter to Senate Leader Chuck Schumer and President Biden urging them to reject the bill, including Food & Water Watch and the Sunrise Movement.

However, others like The Nature Conservancy and the Environmental Working Group applauded the legislation as the single biggest investment in clean energy and decarbonization ever proposed by Congress.

The Congo Basin in central Africa contains the second largest rainforest in the world after the Amazon and is considered an essential carbon sink in the fight against global warming. At the COP26 climate conference last fall, the Democratic Republic of Congo or DRC, where most of the rainforest lies, endorsed an ambitious 10-year agreement (2021-31) to preserve it in exchange for $500 million in international investment, calling itself a "Solution Country" to the climate crisis.

That is until last week, when the DRC reversed course and started auctioning off lands in the basin for oil and gas drilling, saying the decision was necessary to fight poverty in the nation, one of the poorest in the world.

Fossil fuel exploration could endanger not only forests but also Congo’s sensitive peatlands, which store more carbon below ground in soils than what’s held by the trees, according to researchers Bart Crezee and Simon Lewis at the University of Leeds. Writing in The Conversation, they estimate that up to six billion tons of CO₂ could be released—the equivalent to 14 years’ worth of current UK greenhouse gas emissions—if drilling proceeds. In addition, two of the blocks at auction are located in Virunga National Park, a UNESCO World Heritage site and sanctuary for endangered mountain gorillas.

Despite outcry from scientists and environmental activists that the sales could jeopardize climate goals, according to the news program, The World, funding promised at COP26 has not arrived, and a DRC minister said that tackling poverty is their priority, not saving the planet.

Buildings require a lot of energy to keep us comfortable through lighting, air conditioning, and heating systems, so to tackle the climate crisis, structures need to be livable but demand less from the grid. To engineer more sustainable buildings, researchers at the University of Toronto took inspiration from the sea—in particular, shrimp-like creatures called krill that adjust pigment in their skin to darken when it’s bright out and lighten when the sun sets to protect themselves from UV light. 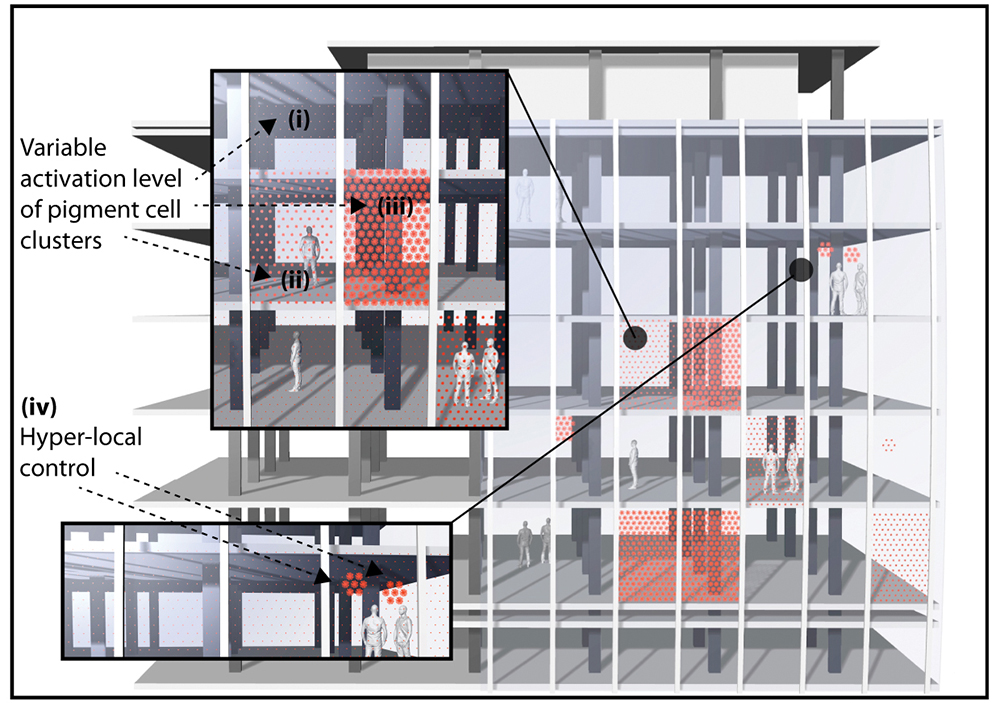 The researchers wanted to apply the same idea to the “skin” of buildings, namely its windows, to see if adding pigment inside the glass—exactly when and where it’s needed—could reduce energy use. In a prototype, they put mineral oil between two panes of glass. They then injected water with cells of pigment to parts of the window where darkening was wanted.

By adjusting the pattern and size of the cells, the windows let in a specified amount of light and heat as conditions like temperature, solar intensity, and the sun’s angle changed in real time. The arrangement could also be customized window by window, offering a more precise and cheaper solution than say motorized blinds or electrochromic technology.

Lead author, Raphael Kay, told H2O Radio the concept could also potentially address the needs of a building’s occupants by tinting a room’s color to wake them up, be more productive, or go to sleep.

And for kicks, the pigments could create art like the Pointillists of the late 1800s, such as George Seurat or Vincent Van Gogh, who used tiny dots of color to create their famous paintings. Perhaps one day soon, climate solutions for buildings could be both smart...and masterpieces.

The paper was published in the journal Nature Communications.