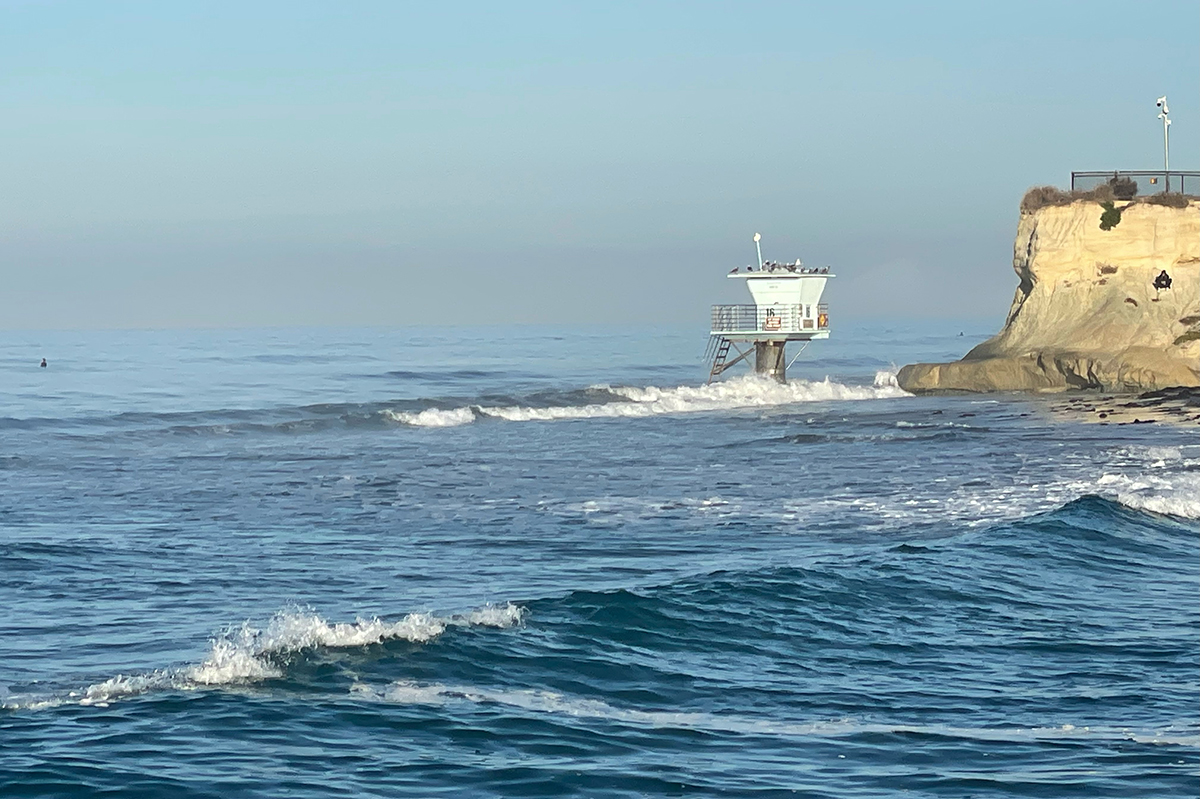 California has been inundated with heavy rain in recent weeks as atmospheric rivers from the Pacific Ocean unleash moisture. But within a few decades, there could be flooding in coastal communities—even on dry, sunny days—as sea levels rise. How much? The king tides offer a worrying preview.

OCEANSIDE, Calif.—In the days before Christmas in Southern California, like many places around the world, holiday music populated the airwaves and shopping malls, including carols of the three kings who were guided by a star toward Bethlehem. On this morning, standing along the shore in Oceanside north of San Diego, two different kings arrived before just Christmas, the king tides and they too offered guidance—a preview of how climate change will change California in the coming decades.

The king tides happen once or twice a year and are the highest tides of the year driven by the gravitational forces of the moon and sun. The most recent king tide happened on December 23 and 24, 2022 and they will occur again on January 21 and 22, 2023.

Mitch Silverstein, San Diego County policy coordinator for the Surfrider Foundation, an organization dedicated to protecting the world's oceans and beaches, sees the extreme high tides as a chance to educate residents about what the future holds. He's out at the intersection of the Strand and Wisconsin Street in Oceanside, along with about 40 other people—all watching, taking pictures, and some getting soaked, as waves fueled by the high king tides crash onto the street.

“It's quite a spectacle out here,” he says, estimating that there’s about a seven-foot-high tide with a bit of swell—not a lot—three-to-four-foot waves but enough of a backdrop to make his case. 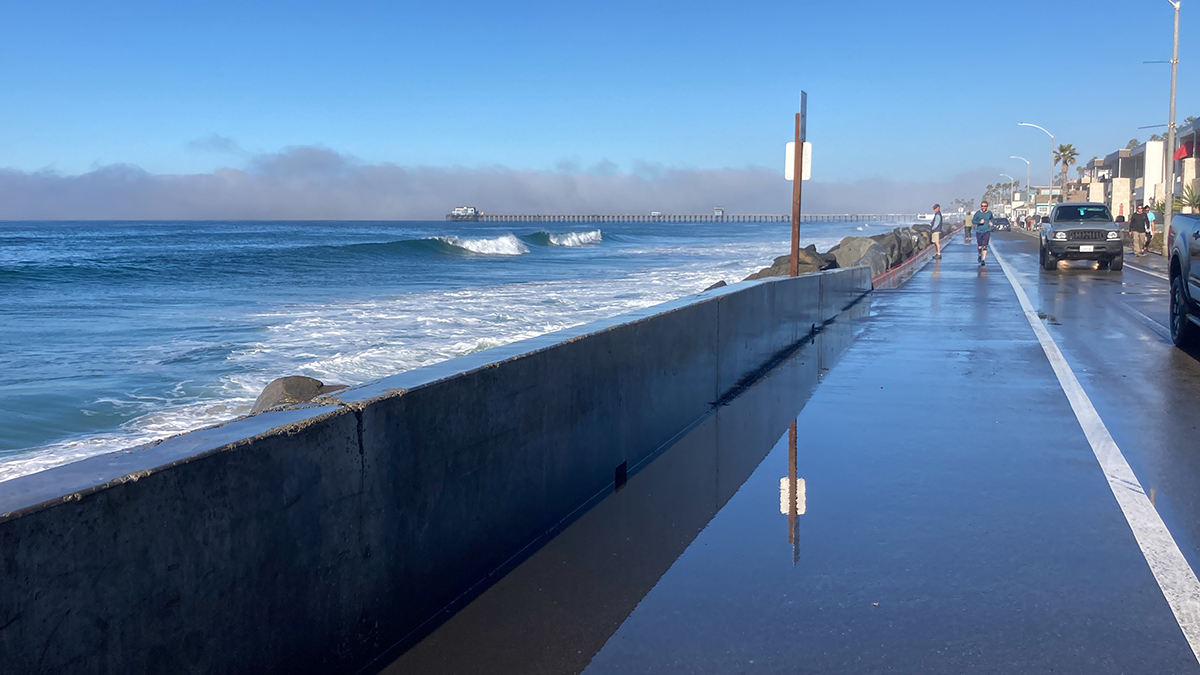 The Oceanside Strand is a paved, single-lane road right up against the shore with massive boulders and a seawall one side and the patios of expensive homes on the other. There’s no beach here, the kind for which Southern California is famous. The shore was long ago robbed of its sand by coastal development.

“Oceanside is afflicted with beach erosion and beach loss, and you don't really have sand on the beaches anymore, and you don't have walkable beaches even at normal high tides,” Silverstein says. “So, to see it at a king high tide, this kind of gives us a real good visualization of what high and normal high tide is going to look like with one to two feet of sea level rise.”

Surfrider has asked its members to video the king tides, so they can share them with cities that might be thinking of permitting more development along the shore, explaining that the high water we see today could be every day a few decades from now. Some people might need more convincing than others, since California hasn’t seen the kind of sea level rise troubles the East Coast has. But climate experts like Patrick Barnard, a research geologist with the United States Geological Survey’s (USGS) Pacific Coastal Marine Science Center say, it’s coming.

“The rates on the West Coast are a little bit lower than the East Coast for sure. We've been spared from this. We've had cooler currents, essentially.”

Barnard explains that cooler water takes up less space, and that’s been suppressing sea level rise. When ocean water warms, however, it expands and takes up more volume. Warming oceans have accounted for about one-third of sea level rise over the last century, he says, adding that melting mountain glaciers and ice sheets in Greenland and Antarctica will contribute mass to the ocean and will account for disproportionately more sea level rise than it has in the past.

“The big uncertainty is the response of those ice sheets. And that's why some of the sea level rise projections out to the end of the century vary between about a low end of two feet and a high end of probably around six to seven feet, because we're still trying to understand more about how those ice sheets respond to warming, how long it takes, what makes ice sheets unstable. And that's sort of the big X factor.”

Barnard says, as glaciers and polar ice melt, sea level rise in California will not only catch up—it will likely surpass the global average. “Yes, it will accelerate. There's just so much momentum and heat in the ocean and the atmosphere and what we've already released in terms of greenhouse gases, we're going to get at least two feet of sea level rise from now to the end of the century as a minimum. And it could be higher depending on our emissions trajectory at the global scale.”

So how to prepare? Current solutions range from continuously adding sand to beaches to so-called “gray solutions” of reinforcing the shoreline by building sea walls and revetements, which Barnard says are “fairly good at protecting property behind them, but they kill beaches.” He explains that they “tend to accelerate erosion at the foot of them and remove sand that gets transported offshore and down coast. And so, they're not good for supporting beach sustainability.”

At USGS, he and his colleagues have been studying the response of beaches to sea level rise over the next century. “We found in Southern California that as many as two-thirds of those beaches are going to lose sand. They’re going to run out of sand and they're going to be gone because there's no place for those beaches to move.” 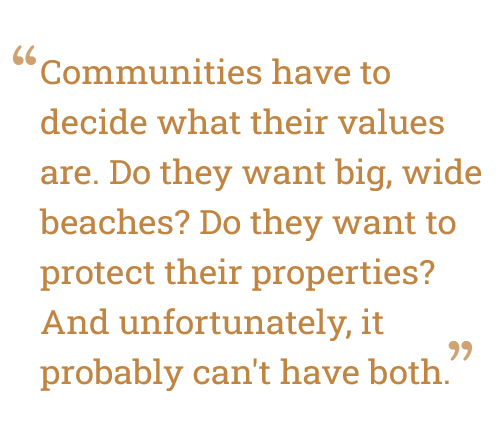 If beaches weren’t boxed in by buildings, roads, and infrastructure, they would naturally migrate inland and protect the coast from the impacts of sea level rise, but they are literally caught between a rock and a hard place. In addition, Barnard says, dams and other structures are intercepting a lot of the sand that would normally naturally make its way down through the canyons and the rivers and ultimately to the coast. “So, we kind of have a double whammy where we're not letting the beaches retreat. And on top of that, we're not giving them as much sand as we used to.”

There's been a big push for nature-based solutions like living shorelines with vegetated dunes to help protect people and property from rising seas and storms. At the end of that spectrum, is something referred to as “managed retreat,” which, Barnard says, “is a very, very bad word in the coastal community.”

Even in California, which is fairly progressive, he says whenever cities attempt to update their hazard plans, if managed retreat is put on the table as an option or put or drafted up in language for the report, there's a lot of pushback. Although relocating beachfront property inland and installing living shorelines can better absorb wave erosion—not to mention provide habitat for coastal wildlife—Barnard says “Nobody wants to hear that. It's a very emotional issue as we can all, I think, you know, empathize with that. How could you as a homeowner—maybe it's your childhood home—how could you face having to leave that property and leave those that sense of place and culture? And so, it's a very emotionally charged issue, and it's been very difficult to discuss in any kind of open public forum because there's so much resistance to it. But in some cases, that's probably the best response.”

It's a complex problem that Barnard says comes down to community-based decisions about what's more important. “Is it holding the line and defending the coast or getting out of the way and letting nature take its course? Communities have to decide what their values are. Do they want big, wide beaches? Do they want to protect their properties? And unfortunately, it probably can't have both.”

Barnard says it’s been hard to convey information unless people can experience it firsthand. “One of the big challenges of climate change is a bunch of scientists telling people something's going to happen in 30 years and just trust us. But when you can see something like the king tides and then relate that to what we're going to experience with more climate driven sea level rise over the next few decades, it definitely has more of an impact than just taking our word for it.” 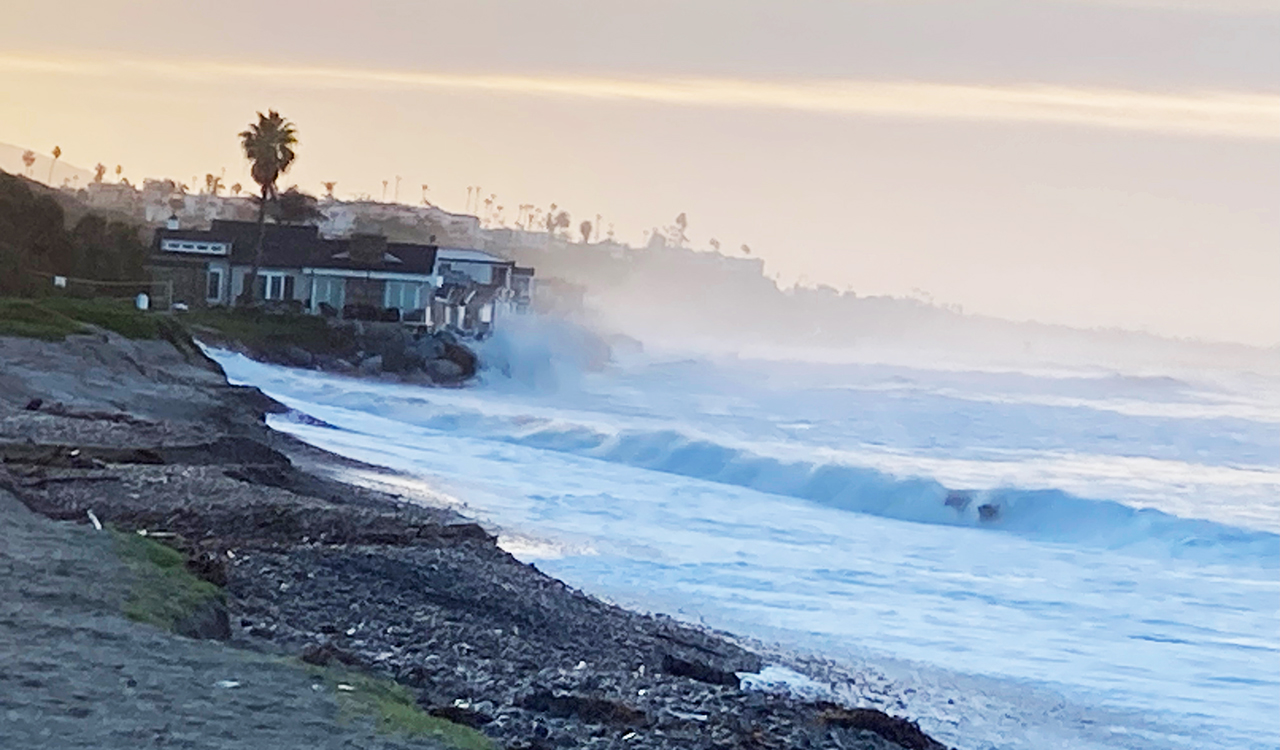 Despite that, people like Brett (last name withheld) who lives on the Oceanside Strand don’t buy the warnings. He said he’s heard talk about rising tides and points to a king tide in 2018 when the water only reached the front of his retaining wall.

“No, they haven't convinced us. We're not concerned that we're going to get flooded by tides that people say,” qualifying his answer with “not in our lifetime, I don't think.”

Undeterred, Silverstein and the Surfrider Foundation steadfastly engage with both the public and governments with the message that there’s still a chance to have sandy beaches—even in Oceanside—if action is taken soon. “It’s scary to be a homeowner here. I think for the long term, these houses are toast. That's how I feel. Long term, they're going to move sooner or later, and the value is going to go down sooner or later because insurance companies are going to stop insuring these homes. Like it's only going to go downhill.”

“I mean, look at this street being totally soaked right now. You know, the cities really have two choices. You know, do nothing, and wait ‘til it's really an emergency. And it's probably going to be even more expensive…”

Or heed the warning of the king tides to save California’s coastline now—or risk paying a princely sum later. 💧