A Car That Captures Carbon As It Drives

“Earth Is Now Our Only Shareholder”

“Instead of ‘going public,’ you could say we’re ‘going purpose.’” That’s what Yvon Chouinard announced on Patagonia’s website, the outdoor clothing company he started 50 years ago. He and his family donated all their stock—valued at about $3 billion—to fight climate change and protect undeveloped land. 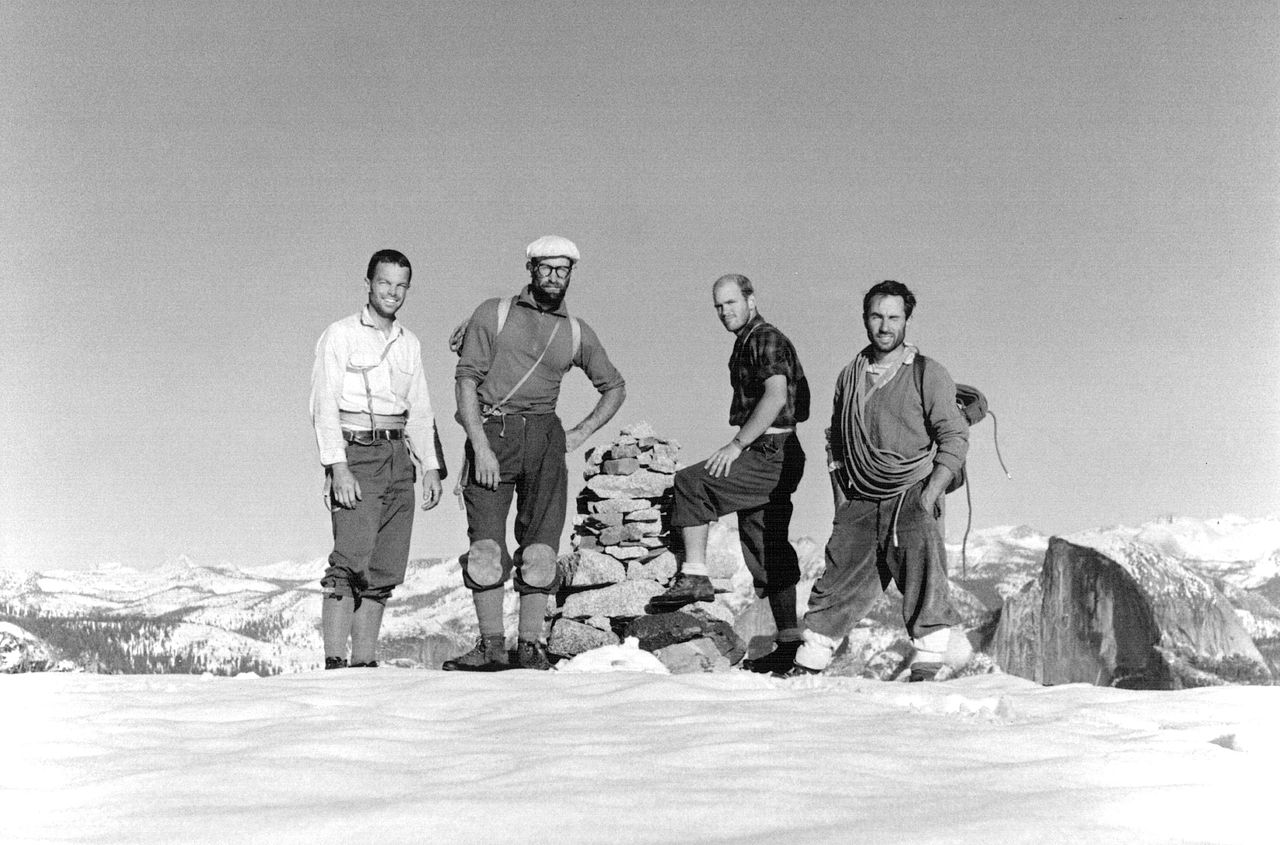 The New York Times first reported that Patagonia will maintain its business selling shirts, jackets, and ski wear, with some fabric made out of recycled plastic bottles, but it will be owned and directed by two organizations. Annual profits of about $100 million a year will be distributed to environmental causes.

Some have described Chouinard as eccentric. He used to spend more than 200 nights a year sleeping outdoors. He lived in his car as a pioneering rock climber in Yosemite Valley during the 1960s eating cat food out of damaged cans he bought for a nickel each. At 83, he still drives a beat-up Subaru with a surfboard on the roof. Five years ago, when he was listed in Forbes magazine as one of the world’s richest people, Chouinard felt it was a sign that he had failed his mission to make the world a better and fairer place. He then made it his mission to give his company away.

There were other options for the family to divest themselves by either selling the company or taking it public. According to Bloomberg, had Chouinard sold his shares, he likely would have had to pay hundreds of millions in capital gains taxes. Had he given them to his children, there would have been millions in estate taxes. Instead, the Chouinard family will have to pay about $17.5 million in gift taxes for his donation, which may be much less than a sale of the stock would have cost in taxes.

It's not clear who or what will be the recipients of Patagonia’s profits to fight climate change. In the past, the company has donated about one percent of profits, mainly to grassroots organizations.

Seafood is one of the most-traded commodities in the world and is susceptible to fraud. To address that problem, a team of researchers from Australia have figured out a way—akin to using fingerprints—to trace chemicals in fish bones and shells of many marine species to stop illegal and unsustainable fishing. 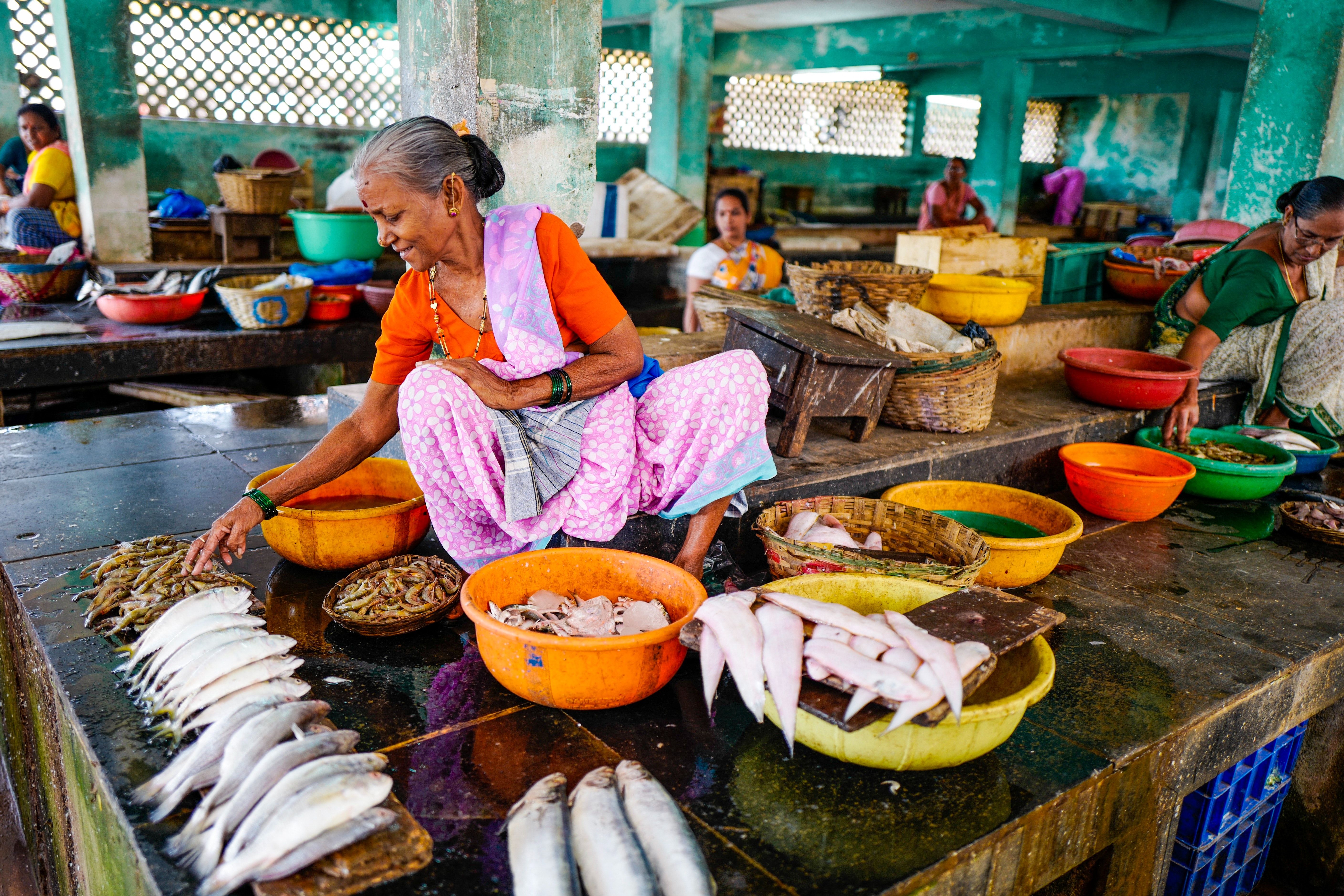 The chemicals can show where fish have been living and their origins. Some seafood suppliers deceive businesses and consumers about where fish are caught, and some products are substituted with those of lower quality or from places that have fewer regulations about sustainability. The researchers say that poor quality seafood can contain pathogens and fewer nutrients.

The study was published in the journal Fish and Fisheries.

Blue Diets Are Good for You and for the Planet

The nutritional content of seafood and its carbon footprint was the subject of new research from Australia. Herring, mackerel, anchovies, and other fish living near the ocean's surface have more nutrients than beef, pork, or chicken, and generate fewer greenhouse gas emissions than livestock. Wild-caught salmon is also a good choice for a low-emissions protein source, but wild crustaceans have as high a carbon footprint as beef. 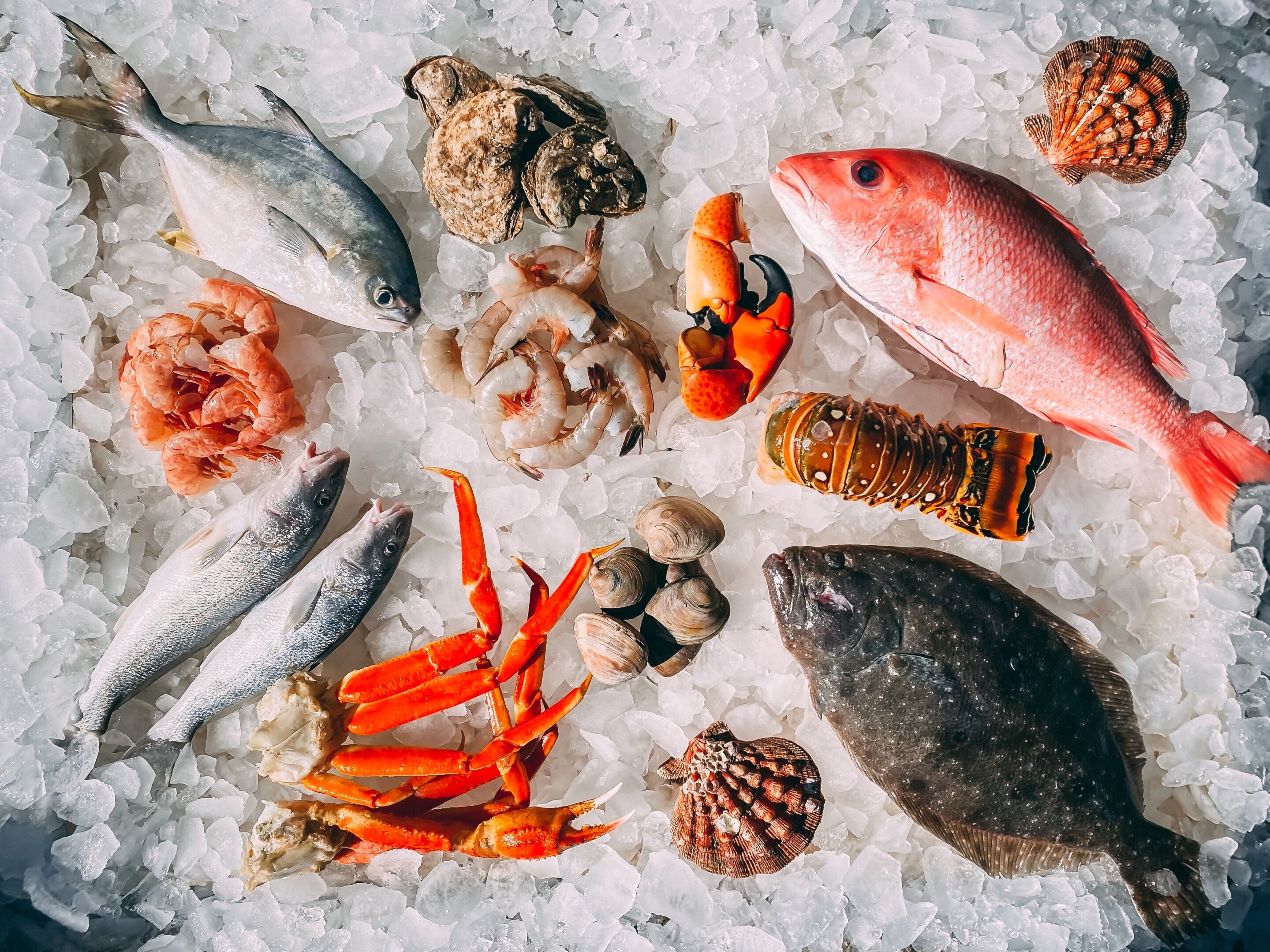 About one-third of global greenhouse gases come from food production and almost half of those are from livestock farming. The researchers say that while plant-based diets are a good alternative to eating meat, blue diets—those based on seafood—are often overlooked. The study recognized that there should be efforts to make seafood more widely available in an affordable way, because those who could benefit the most from nutrient-dense foods might not have access to it.

The study was published in Communications Earth and Environment.

Although we may not be aware of them, there are huge underwater forests of kelp and seaweed that span coastal oceans to a greater extent than previously known. Australian scientists, who discovered the expanse of these ocean forests, say that they cover an area twice the size of India and are larger than the Amazon rainforest. 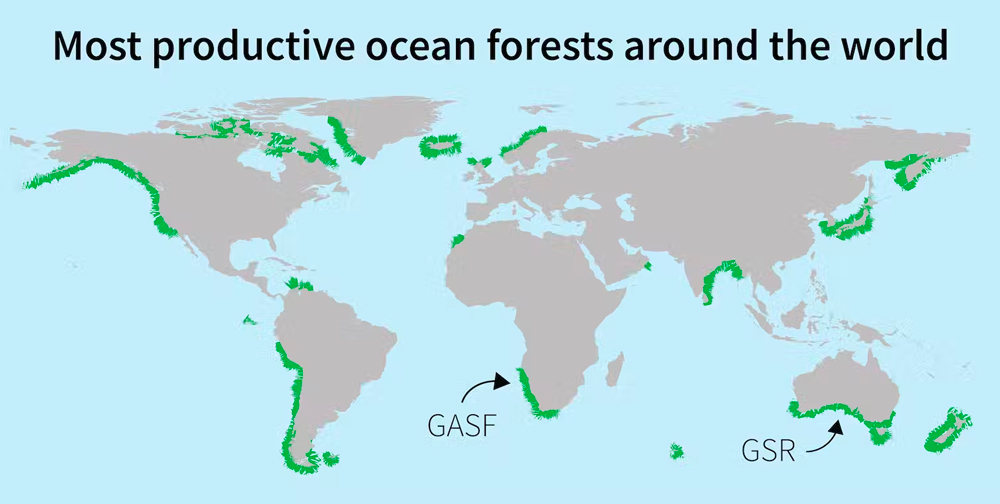 The underwater seaweed forests, which can be tens of meters tall, offer shelter, habitat, and food to marine species and grow at a fast rate, taking up as much CO2 as the Amazon. Writing in The Conversation, the researchers fear that not all that carbon will stay sequestered because the oceans are getting warmer by absorbing heat from the atmosphere caused by climate change. Ocean forests also suffer from marine heat waves.

The study was published in Science Advances.

A prototype car developed in the Netherlands sucks—carbon dioxide that is. The Zero Emission Mobility vehicle named ZEM was built by TU/ecomotive, a student team based at the Eindhoven University of Technology, and it captures CO2 as it drives. 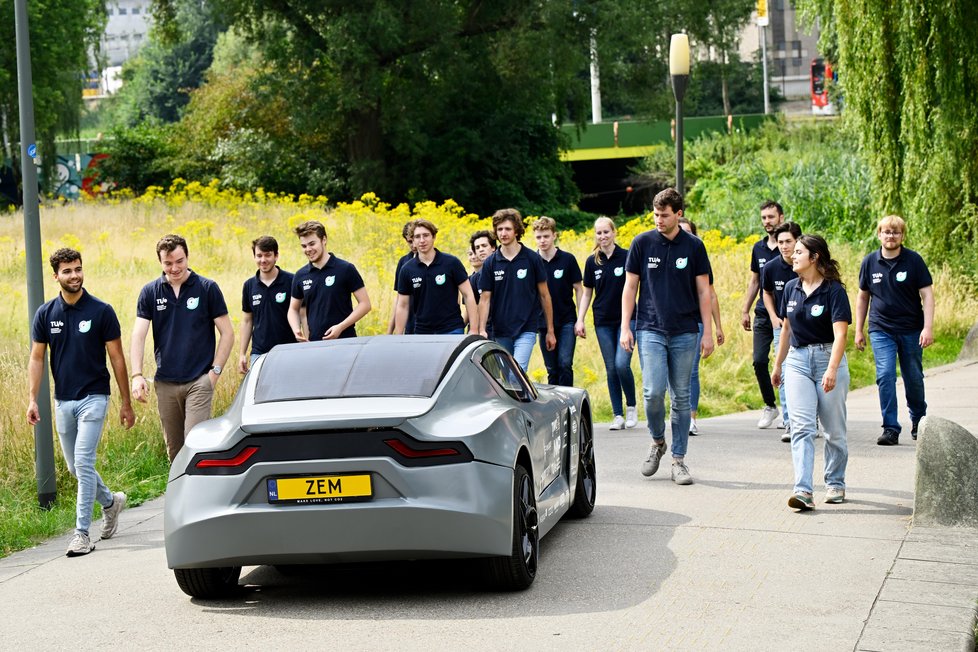 The battery-powered EV uses direct air capture technology (DAC) that filters and stores carbon dioxide. The car can currently drive 320 kilometers before the filter is full, which the team envisions could be emptied at charging stations. They estimate that ten cars driving around 20,000 miles per year would suck up over 40 lbs of CO2 annually—translating to the amount sequestered by one tree—a number that would really add up if their concept caught on with automakers.

The sporty two-seater is intended to be zero emission not only by capturing carbon but also by making its manufacturing process as low emission as possible. Although electric vehicles don’t emit CO2, pollution from battery production is significant and, as Reuters explains, it can take driving tens of thousands of miles before EVs achieve what’s called “carbon parity” with their gas-powered counterparts.

To make ZEM truly sustainable, its components are 3D printed using recycled plastic, which like other cars TU/ecomotive has designed can be shredded and re-used or recycled at the end of the vehicles' lives. ZEM is currently on tour around the U.S., where the team hopes to inspire other students—and perhaps capture the attention of automakers with their carbon-capture coupe.

Basking sharks (Cetorhinus maximus) are so named for their inclination to “bask” in warm waters near the ocean’s surface to filter feed off plankton. The creatures grow up to 40 feet long and can be solitary and cover long distances. So when it comes to romance, how does a basking shark find love?

According to a new study, they turn to speed dating. Scientists from the Irish Basking Shark Group and the UK's Marine Biological Association documented rarely observed circling behaviors, where basking sharks slowly swam in levels of a three-tiered structure they called a “torus.” From 2016 to 2021, using underwater cameras and aerial drones at nine locations off County Clare, Ireland, they captured footage of 19 circling groups comprised of up to 23 sharks.

The groups had equal numbers of males and females and the animals were definitely not feeding. Some of the females changed their body color to be paler than males, something often seen during courtship in other shark species to signal a willingness to mate. As the sharks gracefully passed each other—sizing each other up as the “one”—they gently touched each other’s fins and bodies and within minutes mated.

Basking sharks were hunted throughout much of the 20th century for their liver oil to be used in lamps, lubricants, and cosmetics. They are currently categorized as “Vulnerable” throughout their range and “Endangered” in the northeast Atlantic and north Pacific Oceans by the World Conservation Union (IUCN). The researchers hope their findings can help identify and protect other courtship sites around the world to ensure this gentle giant’s “love dance” can continue.

The study was published in the Journal of Fish Biology.